[I posted this on my class’ blog and it fits a discussion we are having there regarding our project, so may be a bit out of context here. Nonetheless, it does cover some techniques that might be useful for the thing I’m constantly carrying on about here.]

I used to hate people talking in exhibits. I wanted to read labels and focus on the artifacts and these jerks are getting mouthy and distracting. But as my thinking has changed about exhibits and as I come around to the social potential of museum programming, the more I want to hear people talking. But, just yammering away isn’t the point. Rather, talking between strangers and over the topic at hand—to extend the sense of discovery and revelation generated by the exhibits themselves into unexpected (if temporary) relationships between visitors. This means that creating socially productive dialog within and far beyond the exhibit requires well-designed prompts built into the exhibit itself.

We might could do this in a variety of ways. Asking questions and soliciting responses via post-it notes, for instance (but I’ve never seen that successfully promote conversation.) Beyond the exhibit we might offer hashtag that invites visitors to extend the exhibit and its discussion themselves onto the Internet.

In the From Memory to Action: Meeting the Challenge of Genocide space at the United States
Holocaust Memorial Museum, designers positioned a table in the middle of a gallery that urged visitors to action. Overhead projectors showed videos on a table and embedded keyboards allowed visitors to enter their names and email addresses to subscribe to a newsletter on contemporary genocides. 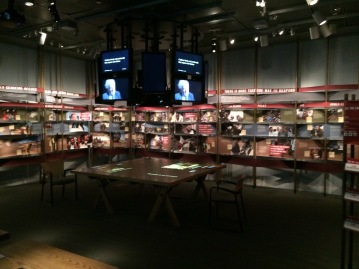 At the Smithsonian’s National Museum of American History, a long dinner table stood at the center of the FOOD: Transforming the American Table, 1950-2000 exhibit. Now, I didn’t pay much attention to the interactives on the table, so I can’t particularly describe the point, but it was surrounded by half a dozen kids who did pay attention.

The dinner table at the NUEVOlution! exhibit has a lazy susan at the middle with examples of Latin and southern food in wooden cutouts. The table invites you to create your own fusion plate. 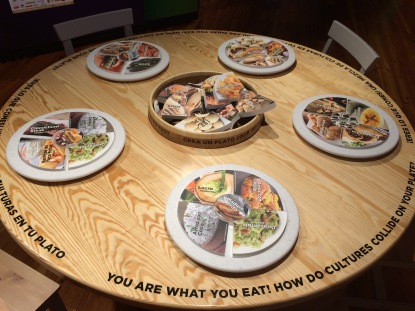 Tables evoke family dinners where, over dinner, parents and children recall the day, argue, or otherwise generate memories. Tables also evoke a deep Christian ethic of breaking bread. In this tradition, potentially hostile strangers choose instead communion over a meal. Sitting at a table and sharing is a sacred act.

So, how can well-designed adornments—projected screens, embedded keyboards, cutouts of food, stenciled text, an extended chair—prompt strangers to sit at a table and talk?